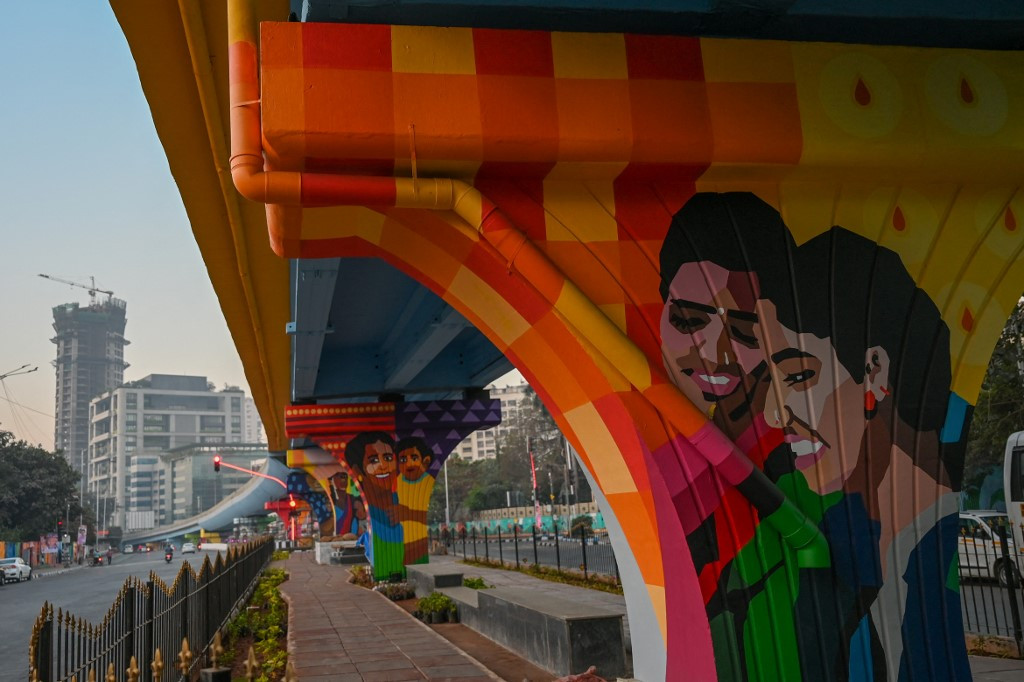 In a giant flyover in the sprawling Indian metropolis of Mumbai, a collective of transgender artists attempt to change mindsets as drastically as they turn concrete pillars into brightly colored murals.

Known as ‘hijras’, individuals identified as male at birth but now part of India’s ‘third gender’ hold an ambivalent position on the fringes of Indian society, respected and feared in turn. because some Hindus believe that they hold the power to bless or to curse.

Deprived of jobs in most workplaces, many are forced to beg at traffic intersections, where they are commonplace in major cities, or on trains.

Some show up at family events such as weddings or birth celebrations, or at new homes, to offer blessings in exchange for money, sometimes threatening to cast curses if refused. Others turn to prostitution, increasing their risk of violence.

The Aravani Art Project hopes to challenge stigma and marginalization by showing transgender people as artists in the same public spaces where they beg or experience abuse.

At the latest mural site – one of Mumbai’s busiest intersections – the team painted portraits of local residents, including two cleaners, a vegetable seller and a policeman.

“It’s an opportunity for us to show what talent we have,” said transgender artist Deepa Kachare.

“We have to beg from people by going to weddings, baby births, shops, trains and some of us are also sex workers to earn money,” she said.

“We go everywhere to beg but we like to work hard and earn money.”

The organization – whose projects are commissioned by governments, corporations and NGOs – has brought together dozens of mostly transgender women for street art projects in several Indian cities.

“People are very happy to see us working as artists,” said Kachare, 26. “Now they think positively when they see us.”

The art collective takes its name from Lord Aravan, a Hindu deity who is “married” to hundreds of transgender people each year at a festival in southern India.

Hinduism has many references to “third genders”, such as Shikhandi, a character from the epic Mahabharata, and hijras have taken on different roles in society over the centuries, including royal servants and harem guardians, according to historians.

But gay sex was criminalized in India during the British colonial period and was only legalized by the Supreme Court in 2018.

The transgender community – estimated to number in the millions – has fought to end discrimination, but many say it still struggles to be accepted by wider society.

“What’s exciting for me is telling them [transgender artists] that they are capable of doing anything,” said female artist and co-founder of Aravani, Sadhna Prasad, 29.

“And gender is really something that should be discussed much, much later and what they do and what they want to do in life comes first.”

Another transgender woman member of the group, Ayesha Koli, 25 – who still begs on the streets – said her pigment-splattered kurta had become a marker of a different gender.

“Nowadays when we put on our ‘painting clothes’ and leave, they curiously ask if we’re painting,” she said. “We are extremely proud to say, ‘Yes, we are artists and we paint.'”