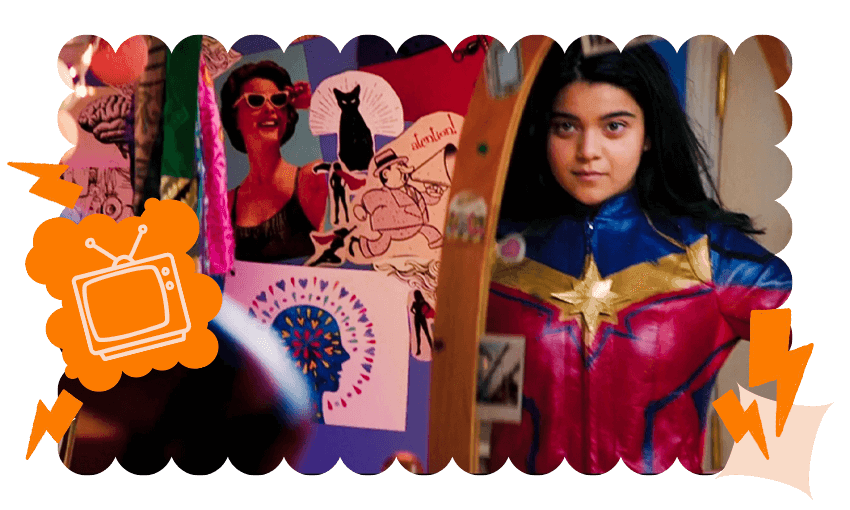 The latest Marvel series is a unique and resonant depiction of the joys and traumas of South Asian culture, writes Sapna Samant.

In 1947, as the sun was beginning to set on the empire, British lawyer Sir Cyril Radcliffe had five weeks to create borders between predominantly Hindu, but secular, India and the new Muslim nation of Pakistan. Radcliffe had never been to India, or even to Asia. He had no knowledge of the realities on the ground or the culture of the subcontinent which had been a British colony for 300 years. This is why he was seen as an “impartial” figure who would make an “impartial” decision on how the boundary would be drawn.

He is said to have arrived, drew random lines through the middle of villages in Punjab and Bengal where people of different religions had coexisted for centuries, contracted Delhi’s belly, burned his papers and returned home to London.

The subcontinent celebrated its independence from Britain at the stroke of midnight on August 15, 1947. Two days later, this border between India and Pakistan, known as the Radcliffe Line , was published and one of the worst humanitarian crises the world has ever known was unleashed.

As a direct result of partition, up to 20 million people were displaced and over a million people died. Intergenerational trauma persists, including among the desi diaspora (people from the subcontinent), although they rarely talk about it.

Jhis year is the 75th anniversary of the partition, and its lingering effects have marked people like me even more than usual. That’s why it was so special when a 16-year-old Pakistani American called Kamala Khan (Iman Vellani) appeared on the new Marvel TV show Ms Marvel, embodying the trauma of her ancestors in Partition while discovering her own superpowers.

My grandfather was a general practitioner in Mumbai at the time. I remember him talking about chaos; of his Muslim patients, concerned about their safety. One of the effects of partition is that Mumbai’s film industry has benefited from the Punjabi workers who moved there from Lahore. Meanwhile, star Dilip Kumar has remained in Mumbai, pleading with his co-star and fellow Muslim, Noor Jehan, to stay as well. But she didn’t, leaving India to settle in Karachi, Pakistan. These are just the stories of famous people. Hindu refugees in India and Muslim muhajirs in Pakistan were all mistreated. That pain is still beneath the surface, and despite the political vultures constantly pecking at those wounds, the love and the exchange of ideas continues.

There is a trend, especially among young people, towards an all-encompassing “South Asian sensibility” that centers India while obliterating other nations in the subcontinent. But as desis, our history and popular culture are specific, the product of the region’s unique and interconnected nature. I like this specificity. I am the desi who witnessed this cricket test series between India and Pakistan in 1978, Runa Laila singing in Hindi, Urdu and Bengali on the local Mumbai TV station, Nazia and Zoheb Hassan leaving dropping “Disco Deewane”, and constantly rewinding Hassan Jahangir’s “Hawa”. Hawa’ on audio cassette.

That’s why Ms. Marvel warms my heart with her very distinctive portrayal that nails the desi diaspora and subcontinental pop culture. I could be Kamala’s mother, making her daughter feel guilty in that classic passive-aggressive way. Every Friday I watch Ms. Marvel with my son. The first week, his eyes widened when he saw a dark-haired girl calling her mother Ammi. Because that’s what he calls me, and Ammi was like his Ammi.

A Pakistani co-worker mocked how Kamala’s parents wanted her to wear a Hulk cosplay costume made out of a salwar-kameez. That’s what I would have told my daughters, she said. Kamala and her best friend Nakia are complaining about the dilapidated female section of the mosque? It is also his experience. She also has a story of how the partition affected her family.

The world’s biggest superstar, actor Shah Rukh Khan, has a role in Ms. Marvel – although he doesn’t appear onscreen. It doesn’t need to be visible. Just banter between desi kids Kamala and Kamran is enough. What is the best role of SRK, they say, listing his films. Shah Rukh’s father was born in Peshawar, now Pakistan.

Most exceptional are the desi songs that populate each episode, like a Bollywood movie that uses songs to transition or punctuate the action. Including early Baloch hijabi rapper Eva B’s ‘Rozi’ and Memba’s ‘For Aisha’, plus Evan Giia and the Nooran Sisters. I know the lyrics to the 1949 Hindi film classic “Tu Mera Chand Main Teri Chandni” which opens episode five by heart.

Where the depiction of a treasure hunt in pre-Partition India in Indiana Jones and the Temple of Doom was an insult to desire, the scene in Ms. Marvel of five people of color searching for a bracelet at the same time and place is magic. Five people from the Noor dimension who could be jinn.

When I watch Ms. Marvel, I’m transported back to my own teenage years thinking about the superpower I could have developed during happy times. But I was traumatized in 1992-93, when Babri Masjid in Mumbai was demolished by Hindutva supporters, and the resulting Hindu/Muslim riots and serial bombings put India on the way to millions more scores. Inspired by young Kamala, I believe that resisting the hatred spreading across India will become my superpower.