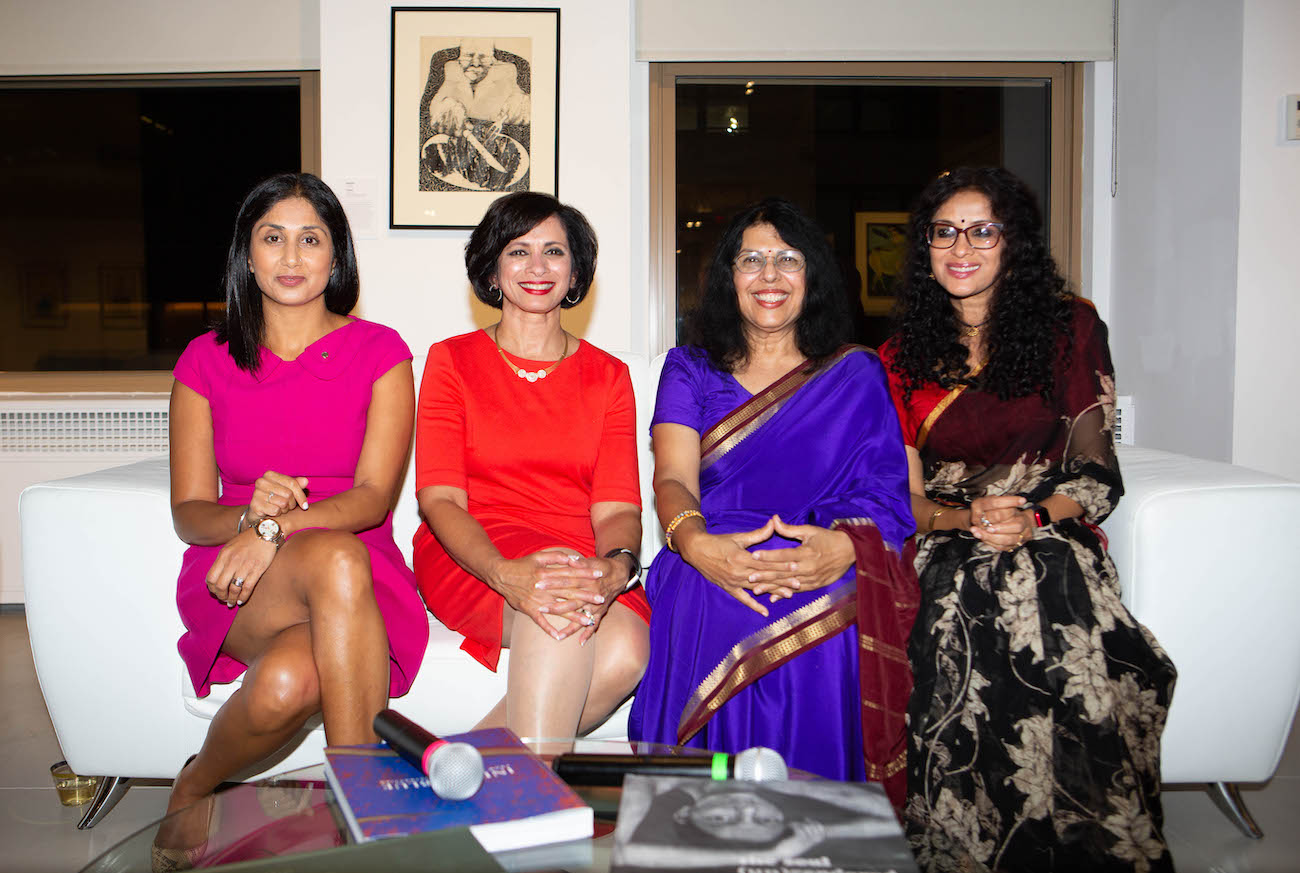 It was a perfect blend of literature, culture, leadership and female empowerment on a beautiful Wednesday night at the Delhi Art Gallery in New York last week. With the beautiful backdrop of perfectly curated pieces by artists from across the diaspora, three well-known Native American women from different walks of life came together for a talk moderated by Seema Kumar, founder of the Seema Network.

Held on the sidelines of the Jaipur Literary Festival New York, the September 14 event, titled ‘SEEMA Sisterhood Salon in the City’, featured author Chitra Divakaruni Banerjee, author, activist and actress Nandana Dev Sen, and Reshma Saujani , founder of Girls Who Code and the Marshall Plan for Moms, and author of “Brave, Not Perfect.”

The event was organized by Kumar, who is also the publisher of “Seema” magazine, who has made it his passion to reach out to women and girls like him. It aims to create a strong community that thrives on mutual support, fuels dreams and aspirations, and develops strong bonds of brotherhood.

The panelists were a perfect match for Kumar’s work and the theme of his magazine. Each, in her own way, established herself as a strong and powerful woman and is a role model for many brunette girls.

Divakaruni, who has written several books with a female protagonist, turning Indian epics into personal journeys from a female perspective, explores women’s struggle to retain their autonomy in a man’s world. Her latest book “The Last Queen” is the story of Rani Jindan Kaur, the youngest and last queen of Maharaja Ranjit Singh, who defied her gender role and faced off against the British and her enemies.

As a writer, Divakaruni says she has always tried to show women as human beings, “who are sometimes heroic and also vulnerable”. His characters are ready to take advantage of this vulnerability to show their emotions like desire and fear. It is all the more important that the women in his stories have these characters because “we are influenced by the women we read about, much more deeply than we realise, especially early in our lives”. As a young girl, she remembers having ideas about women in the books she read. “So I want to create these women, looking at who, all female readers, but certainly female readers will say, ‘Yes, I can be myself,’ and I don’t have to relate to the reflection of what makes me was presented as the right path.'”

This aspect of a woman was presented by Sen who translated a book by her mother, Nabaneeta Dev Sen’s poems into English titled “Acrobat”. It is a collection of poems about femininity, intimacy and the body politic which together evoke the arc of ordinary life.

She read the poem “Acrobat”, describing how a woman thinks she can handle anything. “She thought she knew acrobatics pretty well; that she could juggle time with both hands; play with the now, right next to the then; .. the poem continues to celebrate the acrobatic power of a woman.

Sen, the daughter of Nobel laureate Amartya Sen and famous Bengali poet and writer, told the audience at the Delhi Art Gallery that the translation of 91 of her mother’s poems from six decades of writing turned out to be an extremely difficult task. There was an emotional angle, as well as the fact that translating poetry is much more difficult. “The rhyme obviously needs to be preserved in a totally different language,” she said, adding that she “wanted to be true to her rhyme scheme.”

However, Saujani challenges this very idea of ​​expecting a woman to be perfect, both at work and at home. In her book, she lays out a plan to make “the workplace work for moms.” It dismantles the myth of “having it all” and aims to alleviate the burden we place on individual women to be the primary caregivers and to work around a system built for and by men. In her book, she argues that “the time has come for innovative corporate leadership, government intervention, and radical culture change.”

Saujani’s outlook on a woman’s role has changed during the pandemic. With two small children, she worked full time for Girls Who Code. It was then that she realized that having it all was a euphemism for doing it all. Two million women have left the workforce since the pandemic hit in March 2000, she noted. However, she feels that we women are “so distracted with fixing ourselves than fixing the system.

In her book, she talks about subsidizing childcare, gender-neutral paid vacation and vacation policies, and mental health crises. “Fifty-one percent of mothers report more anxiety and depression,” she says in her book. “So companies need to start thinking not just about our production, but about our sanity. I don’t think we appreciate the exhaustion women are feeling right now.

Pointing to the injustice towards working mothers, she notes that women have always been qualified, “things change when you become a mother, not because you choose to stay at home, but because it becomes untenable. to be a mother and to have a job. If we can fix this maternity penalty, the maternity bias, we’re going to get to equality faster and have a more realistic opportunity to fix this problem once and for all. All of those things are even more relevant now, she noted, in a post-Dob world. “What are we going to do as women,” she wonders. “There is a war on women in America.”

“Literature reflects society”, says the author on the release of the book: The Tribune India